Microsoft/ethr is a simple network performance measurement tool that works on terminal. As the name shows it is released by Microsoft, and actively maintained with many contributors recently. 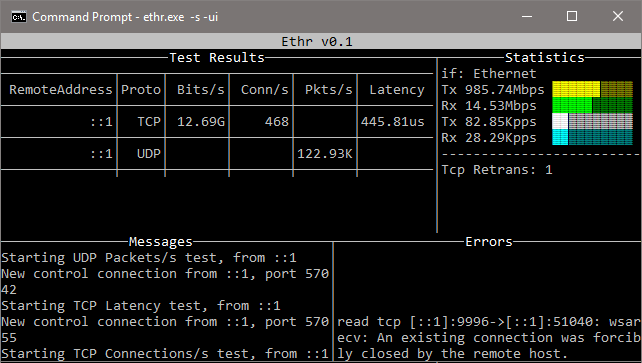 I liked it because it is very simple and easy to use(and it’s always a fun for me to try new tools). Just running with the following commands provides the logs and nice terminal-based UI of per-host network performance measurement.

Server: TUI appears and ethrs.log is created in current directory

It is not realistic to analyze the raw log after the long-run performance measurement, which generates millions of lines of log. Fortunately, the log is machine-friendly by default(and inevitably): per-line JSON formatted like below. So I decided to use Fluentd + Elasticsearch + Kibana as aggregator / visualizer.

In this post, I’ll explain how we can visualize the BitsPerSecond field and make it analyzable on Kibana like this;

I don’t explain how to install the software, as there are well-organized documentations and many blog posts for each. Instead, I’ll give some ethr-specific tips that I came up with in my struggle during the setup.

For simplicity, all the software or the ethr server, Fluentd(td-agent), Elasticsearch, and Kibana, is supposed to be installed in the same host.

This is strange because the time format looked like a standard one(compliant with ISO8601 format), and td-agent recognized the key successfully(the original key/value is omitted in the td-agent.log if time parsing succeeds).

*continuous logging is not considered in this configuration

Maybe digging into the Fluentd documentation would solve the problem, but as in the title of this post, I’d like to visualize the logs as painless as possible, so I decided not to let td-agent to parse timestamp. I knew it could easily be achieved by Kibana: just select “Time” when creating Index Pattern on Kibana GUI and it’s done ;) 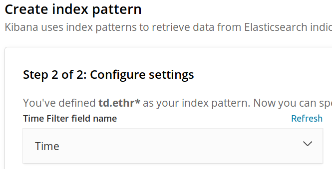 The value in “BitsPerSecond” field has human-friendly representation of bits/sec with units. The unit varies like “43.65M”, “384K”, and “0”(I haven’t seen non-zero value without “M” or “K”, but there might be). Due to this I needed to convert the unit to make it a single format.

There were two options to address this problem;

I chose the latter option finally, as it seemed more fun and it would help in some other cases in the future as long as I continue using Kibana, but this was actually the most painful part, though the name of DSL used in Scripted Field is “Painless”…

To create a new Scripted Field, go Management > Index Patterns > <index name> > Scripted fields. The new field I created was the bps, so the “Type” and “Format” should be “Number”.

Painless can be written in Java-like syntax. What the script does here are;

I’m not so familiar with built-in Java methods so maybe the script above is somewhat inefficient. Please let me know if there’s a better way.

I did nothing special about visualizing the bps value in Kibana. Here’s some small tips for analyzing ethrs.log.

Hope this helps who interested in ethr. Happy performance measurements!